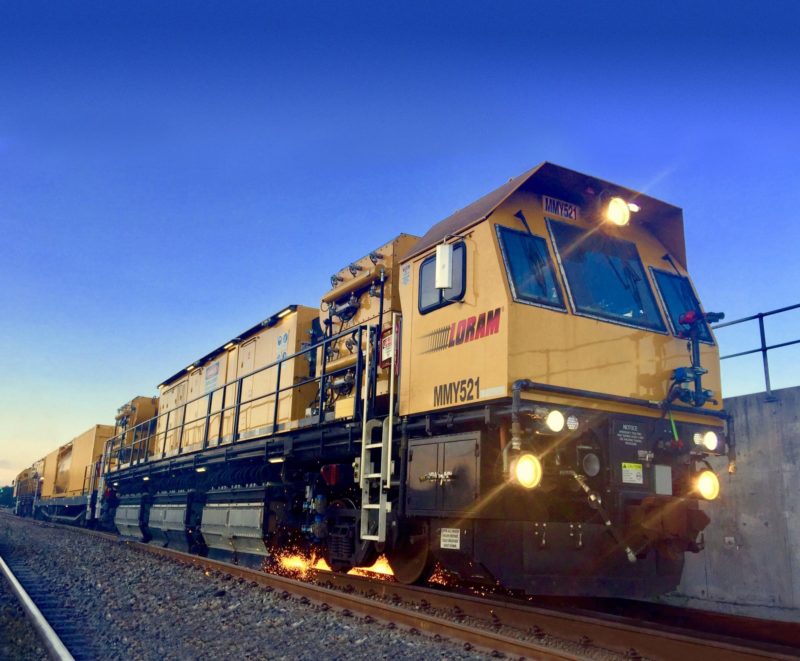 The activities of a mine operation are not only buzzing at the site itself – they’re also moving along Australia’s busy train tracks. Vanessa Zhou speaks with Rio Tinto, Loram and the Queensland Resources Council about the importance of the rail sector.
Australian Mining.

The activities of a mine operation are not only buzzing at the site itself – they’re also moving along Australia’s busy train tracks. Vanessa Zhou speaks with Rio Tinto, Loram and the Queensland Resources Council about the importance of the rail sector.

Innovation is alive and well in the rail sector – one of the key pillars driving the Australian mining industry.

Responsible for the haulage and transport of massive loads to the rest of Australia and the world, the rail sector is the source of some of the biggest robots ever developed.

A key piece of infrastructure supporting the Australian coal industry is Aurizon’s Central Queensland Coal Network (CQCN). Stretching across 2670 kilometres of railway track, it hauls around 230 million tonnes of valuable product a year.

Sixty-nine per cent of its haulage in the 2019 financial year was made up of metallurgical coal, with the remaining driven by thermal coal.

The renowned AutoHaul trains, a Rio Tinto landmark project, also emerged as a market disruptor when they were launched in the Pilbara region of Western Australia last year. AutoHaul has gained a reputation for being the world’s first automated heavy-haul long distance rail network.

As of June, the driverless trains had travelled in excess of 12 million kilometres since they were deployed – equivalent to 15 trips to the moon and back.

Rio Tinto uses 200 locomotives to collect iron ore from its Pilbara mine sites. Two or three of these locomotives make up an autonomous train, together with around 240 ore cars.

This complex operation is made seamless by Rio Tinto’s Iron Ore Operations Centre, which opened 10 years ago to integrate the company’s sprawling network of mines, rails and ports.

Over the past decade, the operations centre has progressed from a focus on big pieces of equipment that increase productivity, to understanding algorithms and machine learning produced by the company’s super computers.

The centre, which is run by hundreds of controllers, schedulers and production system team members, now includes artificial intelligence (AI) that provides safer, smarter and faster decision making within the business.

AutoHaul is already delivering improvements of around 6 per cent to the average round-trip travel time, as well as a generally more consistent and predictable train operation.

Rio Tinto expects to gain further production, safety and cost benefits, including reduced reliance on diesel and maintenance costs, as AutoHaul is optimised.

“Big data analytics will harvest the vast amount of real-time information provided by AutoHaul about the performance of each train, to further optimise all aspects of railway operation,” a Rio Tinto spokesperson tells Australian Mining.

“We expect to unlock latent capacity in the system as it delivers improvements to reliability and flexibility – aligned with our value over volume strategy.”

Keeping up with tonnages

With mining tonnages continually increasing every year, there is growing demand for rail maintenance. These works must be completed within shrinking timeframes to keep the trains moving.

The demand has pushed railway maintenance specialist Loram to develop higher production equipment designs, including its rail grinders for open track, switches, level crossings and other specialty track-works, to where they are today.

“When Loram started grinding over 50 years ago, we were operating machines at about three to five kilometres per hour doing multiple grind passes to complete the work. Over the years, technology has advanced our equipment capabilities. Loram grinders now have more high horsepower motors driving specially developed grind stones that can maximise the production, allowing our equipment to work faster and more efficiently than ever before – all while achieving better quality,” Loram director of business development Thomas Smith, who joined the company 41 years ago as a machine operator, says.

“There have just been evolutions of grinding machines over the years that have now brought us to very large, efficient machines. One of our largest in Australia is 120 grindstones, the most productive grinder in the southern hemisphere.

“Depending on track conditions, we are now working this machine at up to 20 kilometres an hour, primarily accomplishing the required work in a single pass. An equivalent model grinder working in North America averaged over 20 kilometres per hour and ground over 15,000 kilometres in 2019.”

Heavy haul grinding is typically performed on a tonnage cycle basis to achieve a preventive maintenance regimen and optimise the life of the open track rail, specialty sections and turnouts.

The cycles will vary by railway but on one particular railway, for example, the switches and level crossings will be scheduled for a grind every 40-45 million tonnes of haulage.

A single Loram specialty grinder on this network has proven to provide much higher efficiency than the previous three competitor machines in maintaining these cycles.

“There are many tangible benefits for the mining company to go with a single high production machine versus having several machines out there requiring additional manpower – from the reduced traffic interventions, production, quality to safety. A single more powerful machine is much more effective in achieving the desired results,” Smith says.

Loram, an Australian subsidiary of its United States parent company, is now fulfilling the rail grinding requirements on networks servicing many of Australia’s mining giants.

Loram has manufactured over 130 rail grinders globally and is building a solid portfolio within the Australian mining sector with companies such as BHP, Fortescue Metals Group and the railways servicing the coal mines in Queensland and New South Wales.

It has developed a game-changing measuring and reporting system called Rail Pro to support comprehensive grinding operations and rail management.

“When you’re grinding at high speeds in a single pass, you want to know the rail condition before you get there,” Smith says.

“We measure the rail in advance, plan the program and identify the correct grind plan, including the optimum grind pattern and speed to remove the precise amount of metal per location.

“This process has become more automated over the years to ensure we’re delivering the optimal outcome. After we grind, we capture the rail data to verify that the proper rail profile is achieved.”

Ballast maintenance is also a key focus for Loram, which has developed the LRV Specialty Excavator to remove ballast, mud, water, sand and soil from hard-to-reach locations.

The LRV uses an extremely powerful articulated arm controlling the vacuum nozzle to break up compacted material and reach all areas under the sleeper and rail. This is ideal for spot undercutting and specialty excavating in maintenance-neglected locations such as turnouts, level crossings, bridges and signalling areas where cables may be present under the ballast – the LRV can remove the ballast material without disturbing the cables.

The LRV also works swiftly with thorough clean-up operations at loaders, dumpers and in yards. The system is already widely in use across North America, Brazil and Europe, and will soon reach the Australian market.

Targeting an all-round healthy track, Loram is introducing its friction management solutions, both gauge face in curves and top of rail systems, to Australia.

The aim of friction management is fuel savings, reducing noise, and significantly increasing the wheel and rail life.

For top of rail applications, Loram uses a specialty friction modifier that assists the power requirements in pulling the trains to port and back to the mine. This generates significant fuel savings.

“Loram brings a partnership approach with its customers; we want them to be successful with our services and equipment,” Smith says.

“Each of Loram’s product lines are fully integrated into our customers maintenance practices in the markets we serve, and we intend to earn the same here in Australia.”

The Central Queensland rail network is considered the second most valuable supply chain in the Australian resources industry behind the network that services the Western Australian iron ore sector.

The latest trade data from the Australian Bureau Statistics shows that Queensland’s resources sector contributes 80 per cent of the overall trade for the state, amounting to $64 billion.

“(Aurizon’s) CQCN would account for the bulk of this trade,” Macfarlane tells Australian Mining.

“Rail is also very important to the state’s $11.7 billion metals industry, with the majority of the production sourced from Mount Isa and exported from Townsville via rail. To achieve this, explosives, cement and acid are railed west to Mount Isa from Townsville.”

Queensland Treasurer Cameron Dick has provided regulatory certainty for rail and port infrastructure, with the CQCN declared a regulated monopoly until 2040.

Macfarlane says the decision means the critical piece of infrastructure will be under the independent regulatory oversight by the Queensland Competition Authority, which still sets conditions on the access and pricing of this regulated monopoly business.

“This is not a small technical point,” Macfarlane says. “With that greater regulatory certainty, industry can invest and employ more with confidence.”

The certainty provided at the government level highlights the “symbiotic” relationship between Queensland’s rail network and the state’s resources sector. The success of each sector relies on the prosperity of the other.

This article also appears in the September issue of Australian Mining.